A crucial step in recovering from an eating disorder is realizing you are not alone. The shame that surrounds eating disorders often leads people to remain silent about their struggles. And in isolation, an eating disorder grows. To combat this unhelpful cycle, advocates throughout the world are spearheading campaigns that encourage speaking your truth. Because through truth, community grows.

Marlee Roberts is one such advocate of telling truth stories to destigmatize eating disorders. She wrote and directed Little Miss Perfect, a narrative film about a fourteen year old freshman in high school who develops anorexia (see our review here). Roberts explains her intention with the film: “I wanted to create something that would bring people from all walks of life to understand the complexity and psychology of eating disorders.”

Inspired by the positive response to Little Miss Perfect, Roberts launched a campaign called #FaceYourBeast. It grew out of the central theme of Little Miss Perfect. “Facing our inner struggles not only brings self-acceptance, but aids in a larger effort to destigmatize eating disorders by connecting people from all walks of life to overcome the universal feeling of not being good enough.” 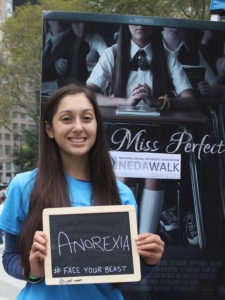 At the National Eating Disorder Association’s an annual walk to raise awareness about eating disorders in New York City, held this year on Sunday October 2, Roberts spoke about her film, #FaceYourBeast. She spoke of the power of claiming out loud the challenges we all struggle with – whether it is anxiety, depression, trust, perfectionism, or an eating disorder.

She explained how the fairy tale Beauty and the Beast inspired her work, “In the classic story, a curse is put on the Beast and he must learn how to love someone and be loved in return to break the spell. I (made) the characters “Belle” and the “Beast” one and the same (in my film): Belle sees a beast in her reflection, and she must learn how to love herself and live with her beast. For Belle, the beast is a representation of her relationship with control. I realized that audiences watching the film would relate to Belle’s struggle by replacing her beast with a beast of their own. In this way, even though they had never experienced what she was going through firsthand, they still connected and came to understand it.”

At the NYC NEDA walk, the #FaceYourBeast campaign came to life. Participants were handed a piece of chalk and a chalkboard, and asked to write down the name of their “beast”. In this moment, Roberts describes, they “must decide whether or not they can be honest with themselves…it seems easy, to write down the very thing that you struggle with every day, but to most people, this battle isn’t one we want to face or acknowledge within ourselves.” 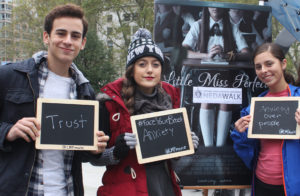 But once their truth was named, most participants were swept up into a sense of pride, and wanted to have a photograph taken to capture this momentous moment. Roberts hopes that these photographs encourage others to take part in the #FaceYourBeast campaign. “It’s important to motivate people to face their struggle, because it is oftentimes buried deep within and can lead to deeper problems if left unacknowledged.”

One of the most memorable moments for Roberts at the NYC NEDA Walk was when a mother encouraged her nervous daughter to write down her “beast” on the chalkboard. “This will be good for your recovery,” the mother said. After much hesitation, her daughter carefully wrote down her eating disorder, and then breathed a sigh of relief. Mother and daughter then embraced for a photograph.

Whether you struggle with an eating disorder or not, you are invited to participate in #FaceYourBeast by identifying and naming your unique internal struggle – an insecurity, an addiction, or an obsession. Together, by owning our truth, we can join Robert’s mission to “raise awareness that everyone is facing some kind of issue and, whatever that issue may be, nobody is alone.”

If you or someone you know is struggling with an eating disorder, reach out to Eating Disorder Recovery Specialists for support.